The Ride- DMZ or Bust 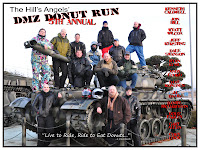 My husband and his buddies are crazy. Not only did they jump on their scooters in the FREEZING cold, but they rode until they met barriers and machine gun toting guards at the DMZ line (Demilitarized Zone). 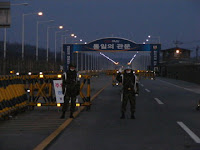 Every year, a group of teachers (the Hill's Angels) from our school jumps on their scooters in the dead of winter and rides as a group to the Demilitarized Zone (DMZ) 40 km north of our school. 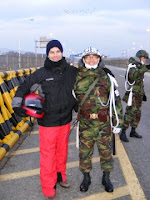 They ride until they get turned back by ROK guards with machine guns (they're nice though). 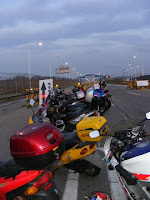 Doug doesn't have a fancy scooter or motorcycle. In fact, I was worried his bike wouldn't even make it that far (usually it's used for getting the store and avoiding Seoul's traffic by weaving in and out of cars and running red lights). His scooter even got a nickname- The Banana. 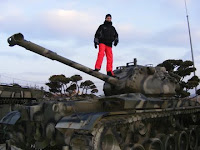 After getting stopped at the border, they visited a war memorial with some tanks on display, and then headed back into the next town to eat at Dunkin' Donuts (gotta love capitalism). 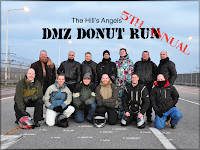 You can also go to this link and see a video of their run.
Cooked up by Christina Farley at 6:29 AM

How fun is that! Loved the photos and video. And their motto - live to ride, ride to eat donuts - cracked me up.

Love it! Adn to cap it all off with a donut is even better. LOL

Thanks for the pics! They look like they're having fun. I rode my scooter to work this morning for the first time in ages since it's been so wet.

Sure, it's in the forties, but it's refreshing!

What a neat tradition! I bet they look forward to it every year!

Oy, I think they are crazy!

The donut part really was funny wasn't it? Glad you liked the video Carmella.

Yes, Kelly, they really do look forward to it. They're getting t-shirts made for it too!

I love that they have two official photos of the whole group! What a fun (and semi-scary) tradition.