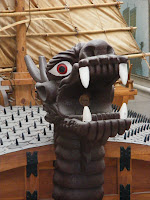 When we went to the War Museum, we visited the replica of the Turtle Ship. It's truly amazing in design and beautiful in appearance. As a history lover, I had to learn about this ship. There was a video there which I watched but then I went a step further and did some reading up on it. Here's what I found:
During the 16th century in Korea, the Japanese attacked the Korean shores. To stop them General Yi Sun-sin was asked to defend his people. But he knew he needed something special, something different to outmaneuver the large Japanese fleet. 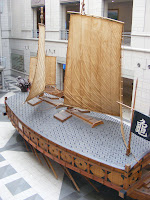 So he took an early design of a turtle ship and improved it. This ship had no keel but a flat bottom of ten heavy wooden boards. From those, he built the ship up on the sides and rounded out the top. The ship’s total length amounted to 110 feet long.
The arched and sloping roof was covered with iron plates. These plates held jagged spikes and knives to hurt boarding enemies. General Yi Sun-sin even went so far as to cover these spikes with grass and hay to surprise of the enemy when they boarded the ship. Ouch! 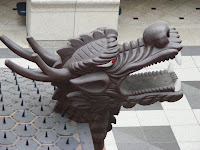 The cool part is at the ship’s bow, a dragon head arched out, its fanged mouth open and wide enough for a cannon to fit inside.
Yi Sun-sin cleverly burned mixed sulfur and saltpeter to create a black smoldering cloud. This cloud hovered over the ship and hid it from invaders. 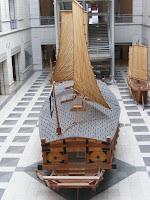 In Yi Sun-sin’s journals he writes the cloud was, “Like a mist so that the enemy could not see the ship.” Approaching enemies would never know where the Turtle Ship was or the moment of their attack.
Using the forty cannons on board, General Yi Sun-sin wielded a fierce attack on the Japanese. At the battle of Myeonnyang, 133 Japanese ships fought against 13 Korean ships. General Yi Sun-sin came out victorious and was able to protect his beloved Korea.
Cooked up by Christina Farley at 7:23 PM

It's so funny but I love these ships too! I've read his memoirs which are quite interesting, but the fact that he invented these make him an amazing man.

Cool! I always learn something interesting on your blog! :)

You have some great pictures, and you make it sounds fascinating!

Ouch - I'm thinking war is never good and it hasn't changed with time.

But those ships are beautiful. Real artwork.

So cool! I love the masthead--I so wish I could see all that in real life.

That is really clever. Did the soldiers hide under the metal covering? And how did they get out? Was there hand to hand combat?

How cool. I'm sure that the fact that they were attacking in a fire-breathing dragon didn't hurt, either. :)

I love the dragon head on the bow. I can spend forever in a museum...

Museums are great aren't they? I love dragons too. Glad you all enjoyed!

That is too cool. I like the veil of smoke idea to hide the ship. Mysterious!

Stacy- Below the decks ran two rows of cabins, twenty–four to be exact. Five held powder-magazines, arms and gear. There were ten oars on each side too.

And yes, there was a small section to stand but because of the metal spikes hidden under the hay, hand to hand wasn't such a good idea! This was one of the reasons they won because the Japanese couldn't get on the ship.

I really love the museums in Asia - so fascinating!

Christina, Thanks for the additional information. It's fascinating. What an ingenious idea on the part of the Koreans.

Christina,
This is really interesting. The design is ingenious and the story of the vastly outnumbered Koreans defending their shores is so amazing. Love it. Thanks for sharing it!

sounds likethe beginnings of a book :)

awesome pictures! I'm a history buff too! I love stuff like this!

What a beautiful boat. It would be fantastic to see it in person.