Obsessed with the Hwarang Warriors

I'm a history fan. I totally love the stuff. Documentaries are almost as enjoyable as watching Jane Austen movies. In high school, I used to read my history books for fun. So when I moved to Korea, I was totally entralled with Korean history and especially the Hwarang Warriors.

I did a blog post on it a while back after visiting a museum in Seoul and interestingly it's one of my most popular posts.

There's a lot of really cool things about the Hwarang warriors:

1. They inspired the Japanese to create what we now know as the Samurai warriors.
2. They practiced a martial art form that evolved into what's taekwondo today.
3. They were known to be able to kick a man off a moving horse.
4. The first Hwa Rang Do were females.
5. They followed many of the same ethic codes as the European knights did.

But the thing that sums it all up the best are the pictures. There's something very romantic about the age of Asian chivalry. 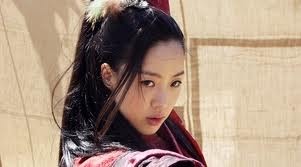 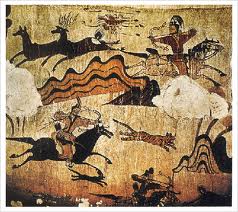 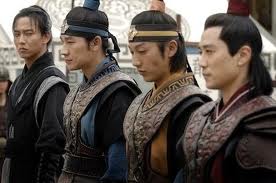 Cooked up by Christina Farley at 8:47 PM

What beautiful photos! Are any of your stories that your write historical?

Wow! I like that the first warriors were women. The Asian equivalent of the Amazons? (But the Amazons were mythical...)

so cool that the first were women! Love the photos.

I'm with everyone else! Loving that these warriors were women. Fascinating.

Another history lover here. But I wasn't quite as appreciative in HS as I was later.

Thanks for sharing. I wasn't aware of these warriors and I think it's awesome that the first ones were women.

Have a great week.

Correction, Tae Kwon Do is based on Karate, (via the occupation), not the ancient ways of the Hwarang. (Tae Kwon Do forms and Karate forms are the same)

Hwa Rang Do is the art with a direct lineage to the ancient Hwarang.

Otherwise, this is a beautiful tribute to this incredible warrior class.

I know! I love how the original Hwa Ran D were female too. Apparently, it caused so much jealously and trouble that they decided to make the elite males Hwa Rang Do instead.

Ferny C.- I suppose some people would agree with your perspective on who inspired Karate. I'm sure we'd have a lovely discussion. But I'm sticking to my version. :-) I guess after living in Korea for 8 years, I tend to take their perspective on things.

And yes, the Hwarang is the art in direct lineage to the Hwa Rang Do. Absolutley!

I'd never heard of them, and I'm super into Samurai. These people look awesome. Thanks for sharing, Christina!

My daughters take Hapkido, which is a lot like Aikido, but Korean.

Beautiful pictures. I'm so glad you bring your enthusiasms into your writing. Sometimes I think we writers are interested in everything!

This post was made of awesome! I love that there were male and female warriors, and wow! The pictures were stunning!

This is not something I knew about, and it is very cool! Thank you for sharing. I'm totally going to check out your old blog post. :)

Those pix are stunning :) My daughter is currently in a Hwa Rang Do martial arts school, and she loves it.

Your daughter is attending a Hwa Rang Do martial arts school? Oh wow. I'm so jealous! That is the coolest thing.

Matthew- I'm so glad you enjoyed these! It truly is amazing that no one knows about them but they know so much about the other Asian warriors.

Kristy- yeah! I hope you do. One day I'd like to expand more on the whole topic.

Kate- you are right. As writers, we find unusual things in daily life, don't we?