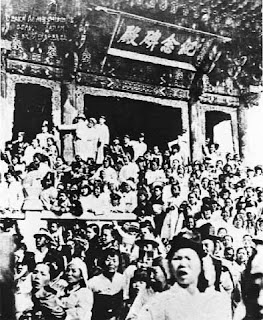 Today, Korean flags wave high along the streets across Seoul. Why? Because they can. And it's all in thanks to a day in 1919 that began the movement to free the Koreans from oppression.

Another name for Samil Day is The March 1st Movement and its literal translation is "Three-One Movement". This is the day when Koreans stood together on March 1, 1919 against the Japanese police. 7,000 Koreans were killed, but this was the beginning of the stand against the Japanese control.


A group of Korean nationalist gathered in a private spot, so as to not cause a riot, and crafted this letter and sent it to the Japanese Governor General:

"We herewith proclaim the independence of Korea and the liberty of the Korean people. We tell it to the world in witness of the equality of all nations and we pass it on to our posterity as their inherent right.


We make this proclamation, having back of us 5,000 year of history, and 20,000,000 of a united loyal people. We take this step to insure to our children for all time to come, personal liberty in accord with the awakening consciousness of this new era. This is the clear leading of God, the moving principle of the present age, the whole human race's just claim. It is something that cannot be stamped out, or stifled, or gagged, or suppressed by any means."

The results of this movement brought serious repercussions for the Koreans, including death and torture. But ultimately, many of the big issues that Koreans had with the Japanese rule were removed. A civilian force replaced the military police and some freedom of press was given.

True, it wasn't until after Japan withdrew their troops after World War II that Koreans regained total freedom from the Japanese rule, but it was a beginning.

Picture used from Seoulite.com
Cooked up by Christina Farley at 12:53 AM

Awesome! All people should be free. :)

That is a beautiful and powerful letter. It speaks to the universal truth. And I bet Kim Yu-Na's gold medal win in ladies' figure skating makes today even more joyious.

Thank you for the history lesson, Christina!

I've never heard of Samil Day. What a great celebration. One of the great joys of experiencing another culture, getting to know all those little things, celebrations and memories you will always have.
Lucky!

What an inspiring bit of history that I wasn't familiar with. Thanks for sharing it!

Cool little bit of history. Thanks for sharing!

I love reading your blog. I never know what I'll learn!

The bad history between Korea and Japan is so disheartening, isn't it?

I've been to Korea four times and each time I was surprised to find plenty of Koreans, mostly young ones, who wanted to know more about Japan, learn Japanese, be friends with Japanese people, etc. And you probably know about the big Korean boom in Japan right now, and how popular Korean dramas/singers/bands are there. But as you probably know, there is so much enmity between the Japanese and Koreans too, and it is so sad.

Mary- Yes, it is sad but I think time really does heal- if you allow it. And time is healing the relationships between the two countries.

Two really good books I thought showed the Japanese side of things and the Korean side of things during World War II here- Year of Impossible Goodbyes and So Far from the Bambook Grove. Both powerful books and I highly recommend them.

Indonesia was the same way. There is still a lot of hatred for the Japanese for the way things were handled.

I think the most important thing is to realize that we're all human and a part of this world together. It isn't always easy to love but if you understand the other more, it makes it hard to hate that person.