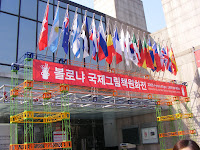 Every year, writers and illustrators from all over the world come together to Bologna, Italy to showcase their work. The Bologna Book Fair and the SCBWI Bologna Symposium are held in conjunction with each other. 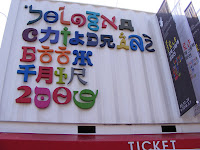 And each year, Korea was the Guest of Honour. This exhibit was titled Round and Round in a Circle. As the guest of honour, the Bologna exhibit came to Seoul and our SCBWI group took a field trip out to see it!

There was so much talent at the fair. Overwhelming! My head was spinning though I'm not an artist, I was inspired.

Here's a recap of some of the fun stuff that I saw: 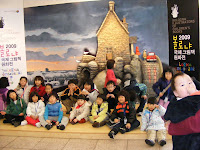 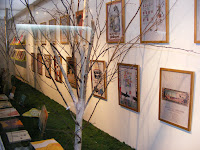 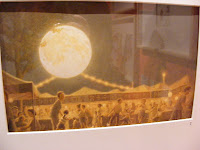 The Chusok Harvest Moon created by Ho Jang from Korea. 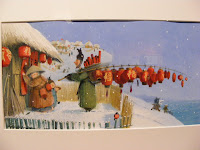 Created by Igor Olenynikov from Russia 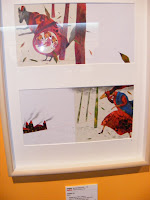 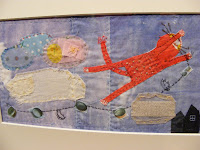 Ji-Yee Jung from Korea created an unusal illustration with fabric. 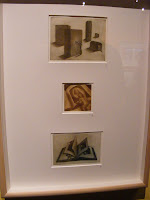 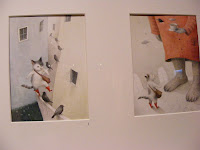 Puss and Boots by Ayano Imai with watercolors and pencils 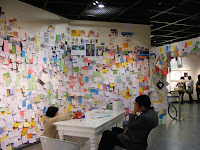 The End!
Cooked up by Christina Farley at 5:10 AM

Just found your blog and I love it! Lucky me, I got to be your 100th follower!!

Cool Christina. Beautiful pictures/illustrations. It must have been fun.

And congrats on 100 followers!

Really neat! I especially liked the fabric illustration. Thanks for sharing. I feel like I get to visit Korea via you. :-)

Kelly! Wow! The 100th follower. That is really cool. It all crept up on me in the midst of my fast drafting. Yeah!

Congrats on 100 followers, Christina! :)
Also, that does look like a cool book fair. How accessible are books in English? I ask because my best friend lives in Spain and she finds it a challenge to find books in English there. And I'm not sure I know this, do you speak Korean?

What a fantastic event. And did I ever mention how pretty your blog is? I really like the cutest blog on the block designs.

Carmella- You still need to come! You have until mid June!

Kelly- There is a bookstore quite a way from us that has English books, but they are very expensive and the selection is limited. BUT my school has a rocking library. They really try to get the best books out there. But because they order in the spring, it's hard to get all the latest titles.

Marcia- Thanks for the love! What I'd really like is to get a design that reflects my books which are more of the adventure/mystery genre. But for now cute is definitly fun.

Beautiful shots! I envy you that you got to see all this first hand!

Very cool. Thanks for sharing!

These are so cool, Christina! It just sounds like the most amazing place to live!

Wow, it looks great! I love how colorful just the sign was!

Beautiful! I would have loved to have been there and seen that artwork up close. I love illustrations. Thanks for sharing, Christina. I bet you had a great time.

I would have loved to have seen all that! Lucky you!