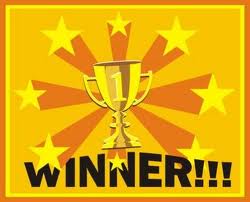 Thanks again to Ellen Oh for stopping by and chatting with us here. She's amazing isn't she?

AND I have a winner of the Korean silk bag. It goes to Kim Kasch. Congratulations Kim!
Cooked up by Christina Farley at 8:49 PM 7 comments:

Email ThisBlogThis!Share to TwitterShare to FacebookShare to Pinterest
Labels: contests 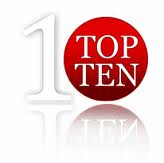 Scholastic, the largest publisher and distributor of children's books, released last December a list of 10 Trends in Children's Books from 2010. I thought this was pretty interesting:


* The expanding Young Adult (YA) audience


* The year of dystopian fiction


* A focus on popular characters---from all media


* The return to humor


* The rise of the diary and journal format

Interview and Contest with Ellen Oh!

Grab a coffee, tea or hot chocolate and relax while we chat with Ellen Oh about her upcoming (AMAZING) book, PROPHECY: The Dragon King Chronicles.


From Publisher's Marketplace - Ellen Oh's PROPHECY: The Dragon King Chronicles, in which an elite warrior and bodyguard to her cousin, the young prince, is feared and mistrusted by all except a select few in the Kingdom who know of her power as a demon hunter, and how she may be the vanguard in the coming war against invading forces, to Phoebe Yeh at Harper Children's, in a good deal, in a three-book deal, for publication in Summer 2012, by Joe Monti at Barry Goldblatt Literary (NA).
Me (drinking my chocolate tea from Jeju): I am so excited about your upcoming book PROPHECY. (I have to admit I’m totally biased since I’m a complete Korean literature fanatic.) What was the hardest part of the whole process?


Ellen (making a face at Christy’s chocolate tea and gulping down her Diet Coke): Revising so many times. I rewrote the book 4 major times and have more than 75 saved drafts of it.


Wow! 75 drafts. That is mind blowing and just goes to show your determination. What do you think was your biggest obstacle in this process?


Ellen: My ego. I did this whole post on how writers need to “shut up and listen” (here’s the link) and it was really my biggest lesson. Learning to take my ego out of the equation. Not just the ego that thinks I’m all that, but the other one that loves to tell you how much you suck. Once I was able to overcome that, my next lesson was learning the art of patience. That is a lesson I’m still learning.


Over at your website you’ve posted maps, photos and a list of terms all pertaining to the Seven Kingdoms. It really shows how authentic and extensive your world building is. When did you first start dreaming up the Seven Kingdoms?


Ellen: I’d been working on a book that used ancient Korea as a setting for a long time. But Prophecy, which I was calling Seven Kingdoms at first, came to me as a fully fleshed out story idea three years ago while I was stuck in beltway traffic heading to work. I remember ripping pieces of paper from my bag – and scribbling different plot ideas on scraps of paper as I inched along the beltway.


And can I say to all my readers that you MUST go out and by this book because Kira is a true heroine. She’s strong and confident, and man, a fantastic fighter. Ellen, what gave you the inspiration to write a character like her?


Ellen: I’m a feminist – and proud of it too. I have 3 daughters. I’m all about Girl Power! The very first version of Prophecy was actually written from the boy’s perspective. But the idea was that this boy would narrate and show us how Kira, and not the boy, was the actual hero. And then I realized that the book needed to be completely rewritten so that I could tell the whole story from Kira’s perspective. Basically, I rewrote the entire book – I think there are possibly 4 scenes that actually survived from the first version.


What I especially love about PROPHECY is that it’s based in a historical setting. What were some of the challenges you faced as you researched?


Ellen: The biggest challenge is that there isn’t a lot of research out there for the time period of this book. 360 CE. Most of Korea’s historical documents were destroyed during the Mongolian invasion and then the two subsequent Japanese invasions. I did extensive research to hopefully make it feel as close to ancient Korea as I could, and then I let my imagination take over. After all, it’s first and foremost a fantasy novel. I invented cities that couldn’t possibly have existed, and that’s ok as long as I got the right feel for the time period.


Now that you have a book date set, what fills up most of your time? Writing a new book, working with your editor, or doing promotional work?


Ellen: I’m currently working on book 2 of the Dragon King Chronicles. It’s going to be even more action packed and filled with new Korean myths like the dokkaebi and the kumiho. Dokkaebi’s are like Korean goblins, but the cool thing about them is that they can be created from inanimate objects. The kumiho is a nine-tailed demon fox that supposedly eats men’s hearts and livers in a vain attempt to become human. It is so much fun incorporating these myths into my sequel.


2. #1 country you’d like to visit: Korea. I’ve never been and I’m dying to go. I’m hoping that I can take the family next summer and that way I could write off at least my portion as research expenses!


3. Favorite mode of transportation: I’m kind of sedentary. I like sitting. But if I have to move, since I can’t clap my hands and have people carry me all around, I guess driving my bad ass new Mazda CX9 would be my preferred mode.


4. Preferred writing method: (i.e.) computer, pen, pencil: Is this a serious question? The idea of writing a manuscript longhand is absolutely horrifying. My hand cramps up at the thought. And even typewriters. Shudder. I don’t think I would have cut it as a writer in the old days. I’m waiting for technology to invent the computer that you can think all your thoughts into and have them all printed neatly out. 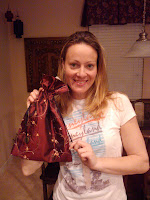 Wow. Are you guys inspired or what? I am. And to celebrate Ellen's fantastic book deal and general all around brilliance, I'm giving away a cute silk purse from Korea. See silly me posing with it.
Just fill out the form below. Contest ends Feb. 28th!
Cooked up by Christina Farley at 7:28 PM 8 comments:

Conferences- Why I Go 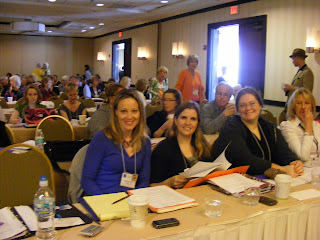 Conferences are a lot of money. Money that most of us don't have much of. But I can honestly say that the money I spent on my SCBWI conference was well worth it.

Wow. I got to meet so many amazing writers, agents, and editors. I sucked in more information that I thought I could manage. And I had way, way too much fun. 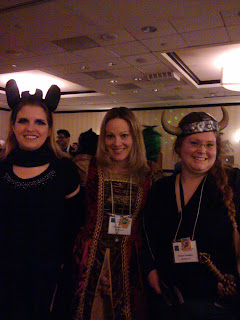 I think my favorite part was breaking down on the dance floor (Okay so I was wearing a medieval dress so it was more like floating around the dance floor but breaking sounds so much cooler doesn't it?) at the Dragonslayer's Ball. I have to say: Bruce Hale really knows how to dance. OMG!

But my favorite, favoritest part was meeting all of my online buddies for the first time. We were like: 'Hey! I know you from your blog! Or I know you from the Blueboards!' We already knew so much about each other yet we'd never really met. Very cool but very weird. 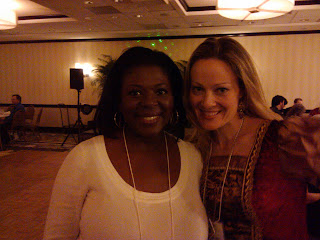 My fun roomy, Mindy Alyse Weiss, who introduced me to everybody (let me tell you this girl knows everyone!). My car buds, Larissa Hardesty and Jess Souders- ARMADILLO! And Karen Strong who loves dessert as much as I do- a kindred spirit! (we both unashamedly begged for extra chocolate cake at the ball- yum!) Watch carefully because their books will be gracing the bookshelves someday. 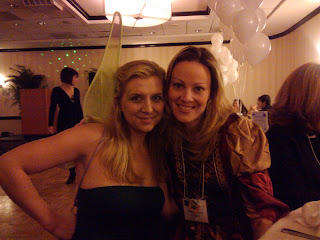 So I want to send a cyber 'wave' to all of my new friends who are totally amazing, talented and brilliant. Can I just say, "Let's do it again in June?"
Cooked up by Christina Farley at 7:17 PM 11 comments: 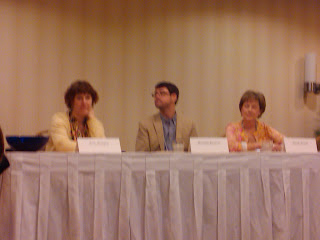 Now for the agent and editor panels at the SCBWI conference. Wow. What a fantastic lineup and they were so open and willing to share their thoughts. I jotted down some notes below and hope they can be useful to you!


• Measure success by your happiness


• Talk through your book with your editor


• Don’t get attached to your title


• He’s an advocate for his writers


• Treat people with kindness and respect


• Titles can be important because they can sell your book


• Writing isn’t for the fainthearted


General thoughts they shared during the 1st Page Critiques:


• Be careful that your beginning isn’t clearing your throat


• Your plot and character must advance at the same time


• Be careful using date/time- needs to have a reason


• Intrigue the reader but don’t confuse them


• Descriptions should be clear, especially in fantasy


• PB’s need to focus on the illustrations 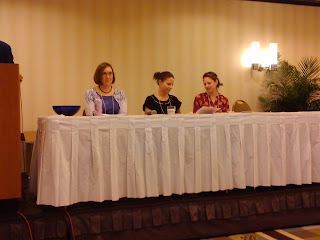 
• Fantasy is a world not bound by our laws


• Fiction of the impossible


• Find a way to make your story fresh


• There is ALWAYS room for romance! They want romance.


• Read everything that’s out there


• Build on the classics


• Keep your readership in mind
Cooked up by Christina Farley at 7:38 PM 9 comments: 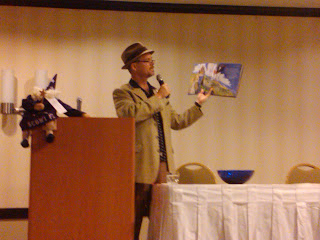 Bruce Hale kicked off the SCBWI Miami conference and boy did he kick it off. Wow. Bruce is AMAZING! And not only is he a good speaker, he can write, sing and even dance. Oh, and he wears really cool hats too.

He read his book, Snoring Beauty to us (so funny! I loved it so much that I read it to my students who in turned laughed hysterically). He also concluded his talk with a song and got a standing ovation at the end. Truly inspirational!

As he was speaking, I jotted down some notes that I wanted to share with you. So if you're feeling down or need some great advice, listen to Bruce Hale. He really knows what he's talking about.


• Writing is a game of head and heart, not a game for sissies
• Art is war- at war with yourself
• Develop a mind/spirit of warrior 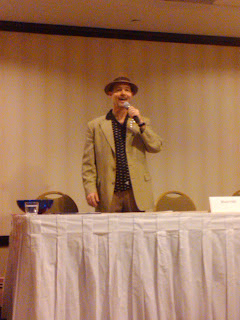 
• We are nothing more than the sum of our habits


• Too often do you do your habits- email, social networking, blog, tweet, TV, socialize on the phone


• Recommends changing 2 habits at a time


• Write stories you are passionate about


3. Think it Through, Take the Big View


• Strategic thinking through the story


• Do you have something you are afraid to face?


• Most people give up just before they meet success


• If you pushed a little harder, would you get the results you wanted?


• Give yourself permission to eat Haagen Dazs

Cooked up by Christina Farley at 7:26 PM 5 comments: 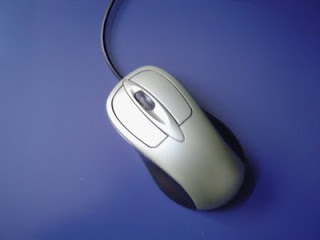 I've been locked up in my writing cave for the last week (a little sick from too much chocolate and Twizzlers) working on revisions. But I still have more notes to share with you on the conference. I will get to those this week because they've got some good stuff in them and you'll want to read them!

But in the meantime, I wanted to share some links that I thought were very linkworthy. They were passed to me by writing friends and some of the conference speakers:

Writer's Knowledge Base: a search engine for writers

Scott Westerfeld's Teen Vernacular by Notes from the Slush Pile

Happy Clicking!
Cooked up by Christina Farley at 8:12 PM 9 comments: