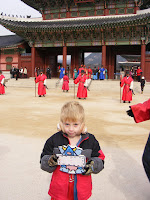 Critter took on a whole new adventure as he stepped up to the guards of Gyeongbokgung Palace. This is the central and largest palace in Seoul, which I think surpasses the Forbidden City in beauty and the the Golden Temple of Japan in architecture. 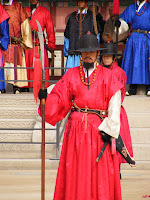 It was a cold day, so Caleb kept Critter warm in his arms. We came up to the fierce guards, so fierce that Critter and the boys told me "No Way!" when I tried to get them to take a picture with the guard. But one glimpse of that sword, I had to agree. 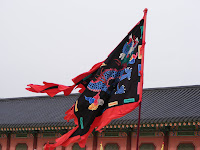 We arrived there just in time to see the changing of the guards. Critter liked the Blue Dragon flag. 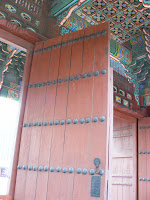 Then we entered through the massive gates (Haungnyemun). This palace was the royal family's residence during the Joseon Dynasty and is flanked by ragged mountains. Pretty impressive if you ask me.

Unfortunately, the palace was burned during the Japanese Invasion in 1592 but rebuilt during the reign of King Gojong. 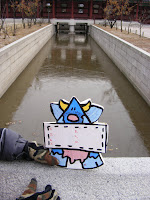 The river flowing inside the palace was frozen. When we crossed the bridge (Yeongjegyo) Critter tried jumping into it (he's dying to ice skate). Don't jump Critter! Caleb caught him just in time. Whew. That was a close one. 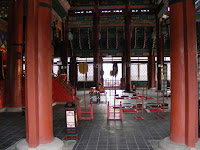 Our last stop (before Critter froze to death) was the Sajeongjeon. This is the hall where the king pondered his decisions and met with his officials. The king held a meeting there every day at 3 am and 5 am. We were pretty impressed at that since we were tired just walking to the building. 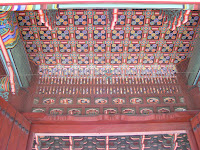 The ceiling is truly breathtaking. 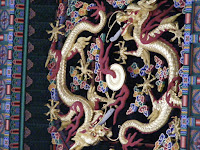 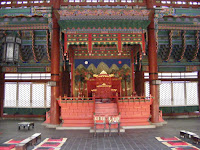 Luke wanted to sit in the throne and Caleb wanted to do his taekwondo moves in the center.

But there was a sharp wind cutting through (the winds here make the weather seem colder than it is) and we were COLD. Critter suggested hot chocolate. Great idea Critter! 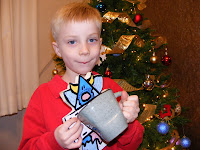 So we headed back home to our cozy, warm apartment for cocoa and cookies. A great end to a fun adventure.
Cooked up by Christina Farley at 1:56 AM

I just KNEW Critter was going to have a great time in Korea!

wow! awesome pictures. I think critter is the luckiest foam board critter to ever been created!

Critter lives the life! He is so international.

WOW! Critter is having quite an adventure in Korea...what a lucky critter he is...Hugs...Great pics...

Very cool (& not just for Critter) so glad that Caleb saved him!

Nothing better than cocoa and cookies. Great pictures! I think I recognize you from the blueboards. . . thanks for hopping over to my blog. ;)

I'm so glad Critter has arrived! What a great adventure he's having. Love all the photos and stories Great fun.

Thanks guys! We sure had fun here. But it's time for him to go somewhere else now. So sad. We got kind of attached to him.

Critter is certainly well traveled. Flat Stanley visited me once, and I found that any guest who can travel between books in my suitcase is a good guest indeed.